“In all my travels I’ve never been attacked by a wild animal, lost my way or caught a disease… I don’t think there’s any place in the world where a woman can’t venture.”

Ynés Enriquetta Julietta Mexía was born on May 24, 1870, in Washington D.C., where her father, Enrique Mexía, was a Mexican diplomat. A year later, they moved to Mexia, Texas, a town founded by her ancestors. In 1879, after her parents separated, Mexía was sent to a boarding school where she felt isolated and lonely. After completing her studies, she considered entering a convent, but her father asked her to supervise his ranch and household in Mexico. In 1896, her father died, and Mexía stayed in Mexico managing his businesses.

In 1909, after two troubled marriages, she developed a mental and physical illness, then called a “nervous breakdown,” and her physician in Mexico advised her to seek medical help from the noted psychiatrist, Phillip King Brown. Mexía moved to San Francisco, California, and was under Dr. Brown’s care for 10 years. Following his encouragement, she joined the Save the Redwoods League and the Sierra Club, and became an active member of the early environmental movement in California. She participated in hiking and camping trips in the National Parks, and developed a deep interest in plants and nature.

In 1921, at age 51, Mexía enrolled at University of California Berkeley, where she took classes in science and natural history and attended a university expedition where she was introduced to botany, the study of plants. In 1925, Mexía was invited on her first plant collecting trip to Sinaloa, Mexico, on a group expedition sponsored by Stanford University.  Mexía soon realized she would be more productive on her own, and secured funding from other institutions and ventured alone with local guides into Mazatlán and the Sierra Madre Mountains. Mexía continued to explore and collect plants in little-visited regions of North and South America, including Mt. McKinley National Park in Alaska, as well as in Mexico, Brazil, Peru, Chile, Ecuador, and Tierra del Fuego in Argentina.

In a 13-year career, Mexía collected more than 145,000 plant specimens and discovered 500 new species, of which several are named in her honor. In 1938, on her last expedition in Mexico, she became sick and was diagnosed with lung cancer. She died on July 12, 1938. Mexía is recognized as one of the most accomplished and prolific female botanists of her time, demonstrating that there is no age limit to pursuing your life’s passions.

Ina Vandebroek, PhD, is the Matthew Calbraith Perry Associate Curator, and Caribbean Program Director at The New York Botanical Garden. She has conducted ethnobotanical research and outreach for 20 years, studying the relationships between plant diversity, traditional knowledge, and community livelihood and well-being, working in collaboration with indigenous and farming communities in Bolivia, the Dominican Republic, Jamaica, and New York City. Her research underscores the importance of plants for the preservation of cultural heritage. In New York City, Vandebroek uses the results of her research partnerships with Caribbean and Latino communities to develop training activities for medical students and health providers, to help promote culturally sensitive healthcare. Vandebroek is also an Adjunct Lecturer at the Yale School of Forestry and Environmental Sciences. 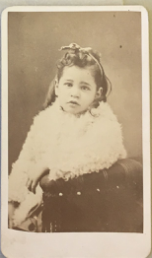 Ynés Enriquetta Julietta Mexía, born on May 24, 1870 in Washington, D.C. Her father, Enrique Mexía, was a Mexican diplomat and her mother, Sarah R. Wilmer, born to a wealthy Baltimore family.

At age one, Ynés Mexía moved to Mexia, Texas, in what is now Limestone County. In 1833, before Texas became a part of the U.S., the Mexican state of Coahuila and Texas granted Jose Antonio Mexía (Ynés’ grandfather) 83, 908 acres of land. In 1870, the Houston and Texas Central Townsite Company purchased 1,920 acres of Enrique’s estate and named the town Mexia, in his family’s honor. 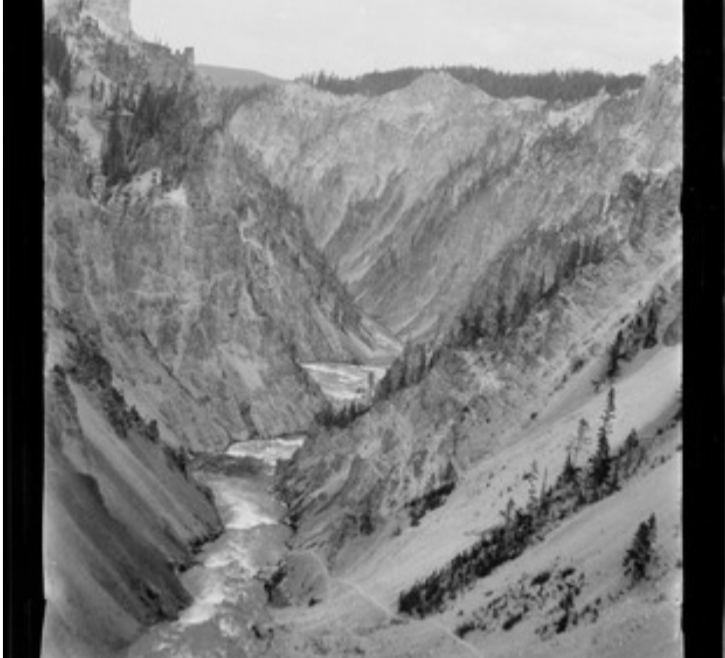 The Yellowstone Act of 1872 initiated the creation of national parks and the idea that the federal government should set aside land for preservation and public use. 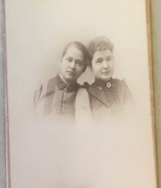 After her parents separated, Mexía, her sister, and their mother moved to Philadelphia. She attended different boarding schools in Toronto, Canada, and Emmitsburg, Maryland. Mexía had a very lonely childhood and being separated from her family isolated her even more. 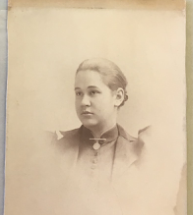 After Mexía finished school, she received a letter from her father asking her to move to Mexico to help him care for his ranch in Tacubaya. While she had plans to enter a convent to become a nun, she was excited to be close to her father again, and moved  to Mexico, where she learned to manage his businesses. 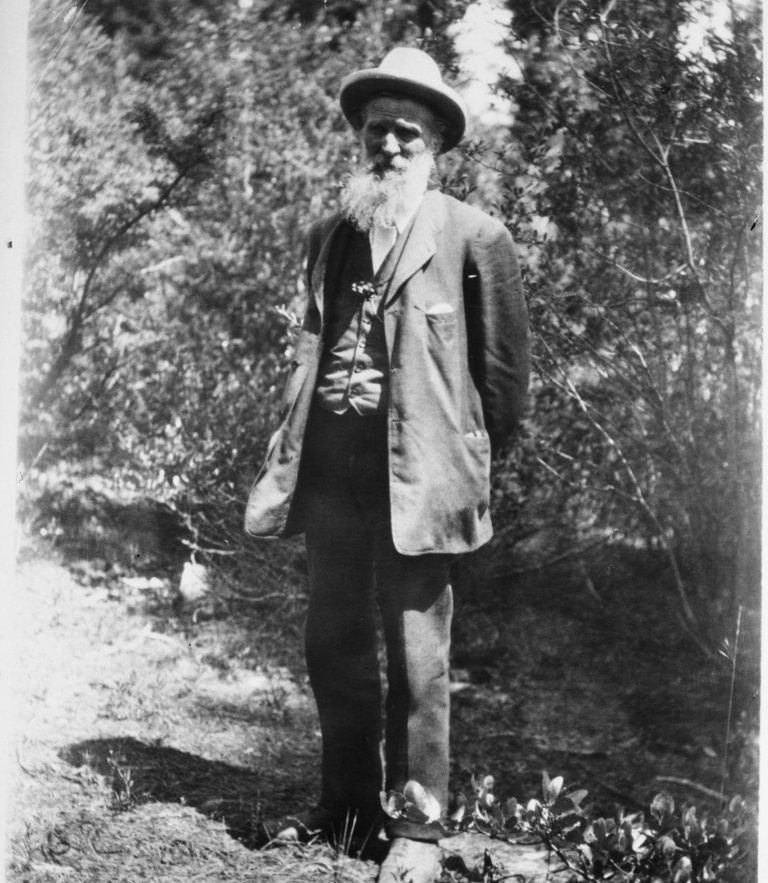 John Muir, naturalist, conservationist, writer, and botanist, founded the Sierra Club on May 28, 1892. One of the first environmental conservation groups, it focused on preserving the Sierra Nevada mountain range in California, including Yosemite National Park. 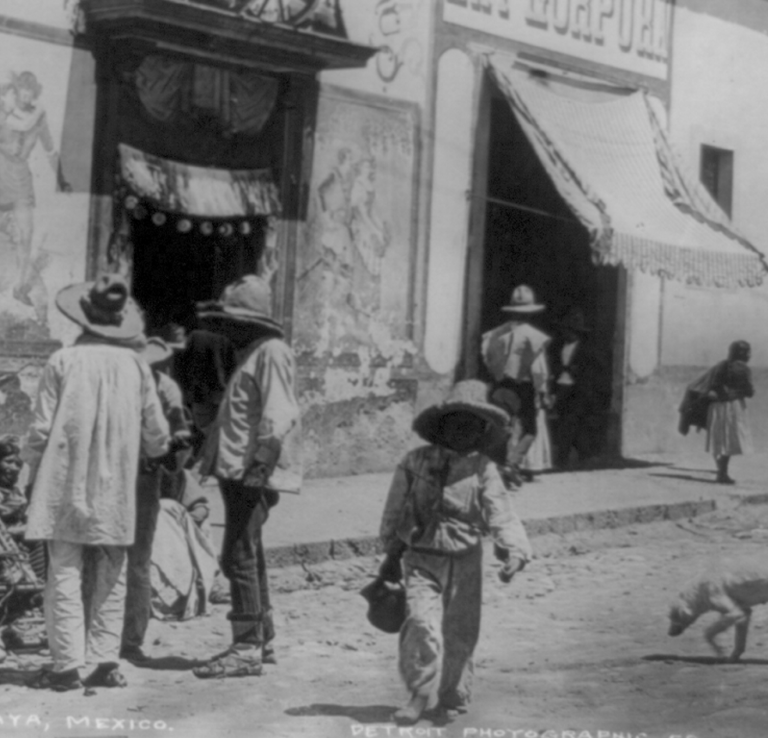 After her father’s death, Mexía inherited his ranch and continued to manage it.

[Image Courtesy of Library of Congress] 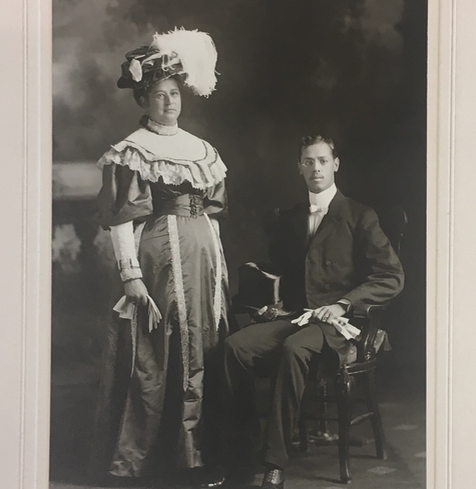 Mexía married Herman Laue, but he died after six years of marriage. 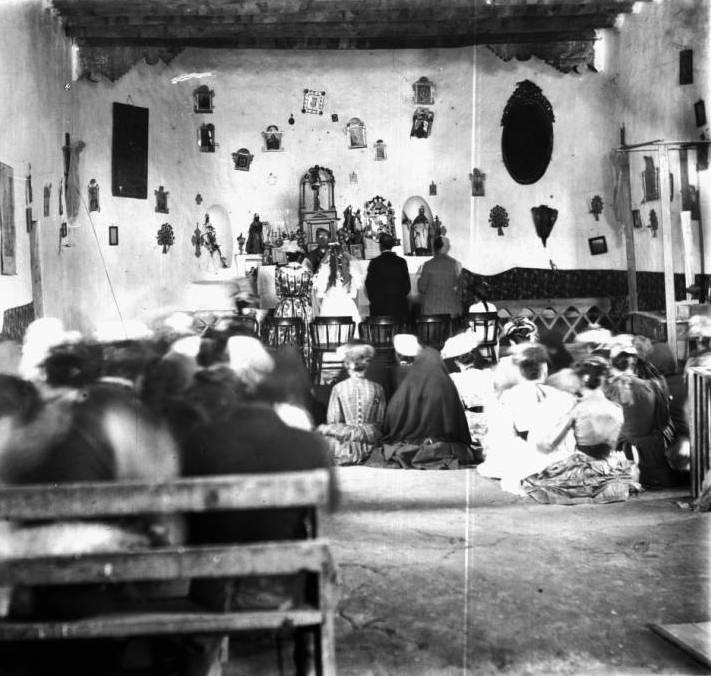 Mexía married Augustin de Reygadas and they ran the Tacubaya ranch together. Mexía quickly became unhappy in her second marriage, which ended up taking a toll on her health and wellbeing. 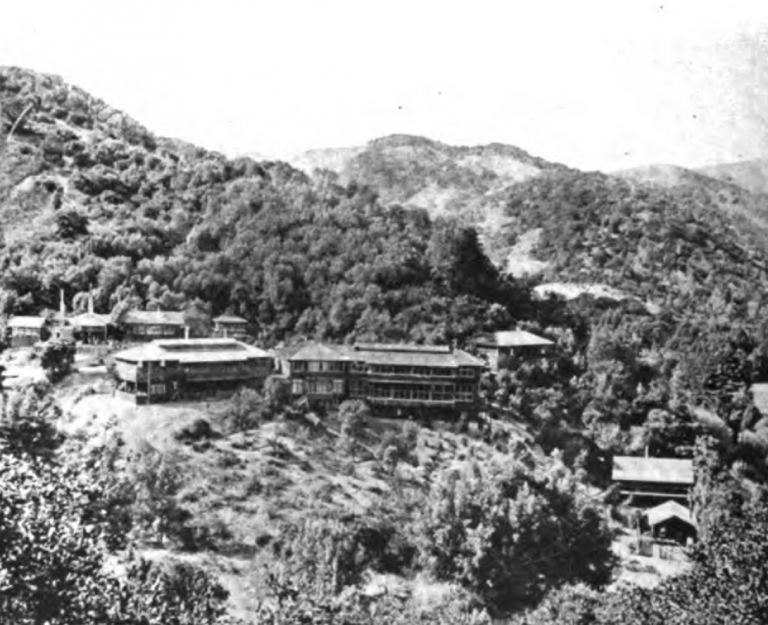 After suffering a mental and physical breakdown, her physician advised her to move to California to consult with Dr. Phillip King Brown, a highly respected psychiatrist and physician specializing in women’s health. Brown founded the Arequipa Sanatorium in Marin County, a space where patients would learn how to cure themselves by being in nature and practicing occupational therapy.

In 1911, Mexía separated from her second husband after he bankrupted her ranch. In 1920 Mexía sold the ranch and took back her name. It is not clear whether they ever officially divorced, but both agreed to separate. 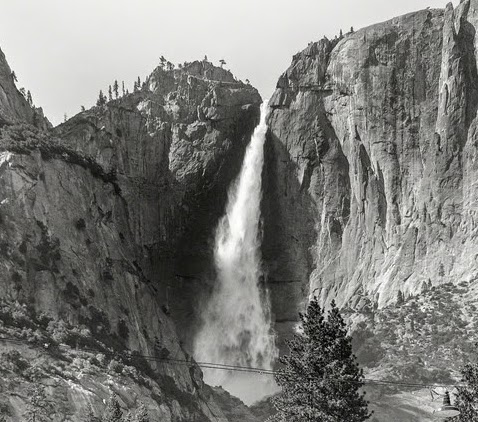 Following the Yellowstone Act, other national parks were established, including Sequoia National Park, Kings Canyon and Yosemite National Park. Each of these California parks were managed independently, and some were better managed than others due to limited funding and staff. In 1916, President Woodrow Wilson created the National Park Service, to integrate the management of U.S. parks under one agency.

[Image courtesy of John Muir and the Sierra Club] 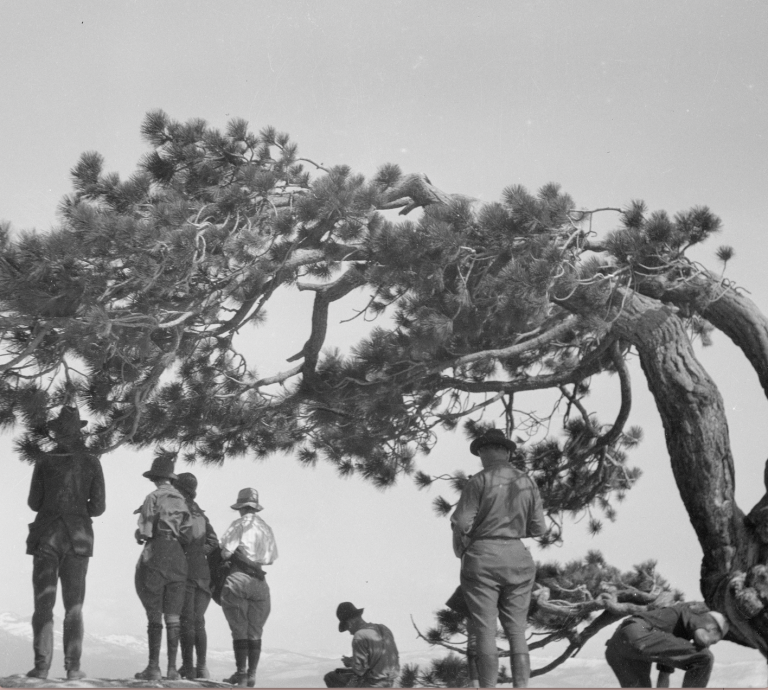 In 1917, Mexía joined the Sierra Club, where she participated in outings and hikes in Yosemite Park, the Sierra Nevada Mountains, and the Montgomery Woods, and became particularly interested in the plants and trees in these locations. 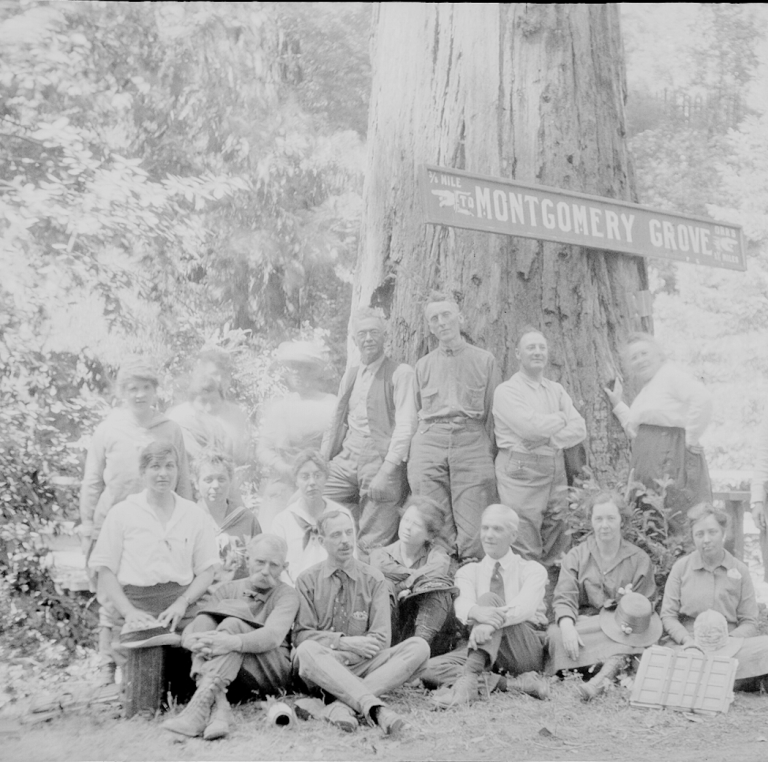 The Gold Rush and migration towards the West created a high demand for timber. As technology improved, it became easier and cheaper to cut down  redwood trees, leading to large scale logging and the privatization of redwood forests by lumber companies. By the 1910s, deforestation of the redwoods became a big concern, inspiring a movement to save the redwoods. In 1918, the Save the Redwoods League was founded, dedicated to fundraising to purchase redwood groves for preservation. Between 1920 and 1928, the League purchased the groves that would later form the Redwood National Park.

[Learn more about the redwoods at Save the Redwoods League Timeline.]

In 1918, Mexía visited Montgomery Grove, where she was captivated by the redwood trees. She wrote to the organization, “I am heartily in sympathy with any effort to save these trees, and wish to inquire whether it is only trees in Humboldt County which are under consideration (to be saved) or groups throughout the State.” 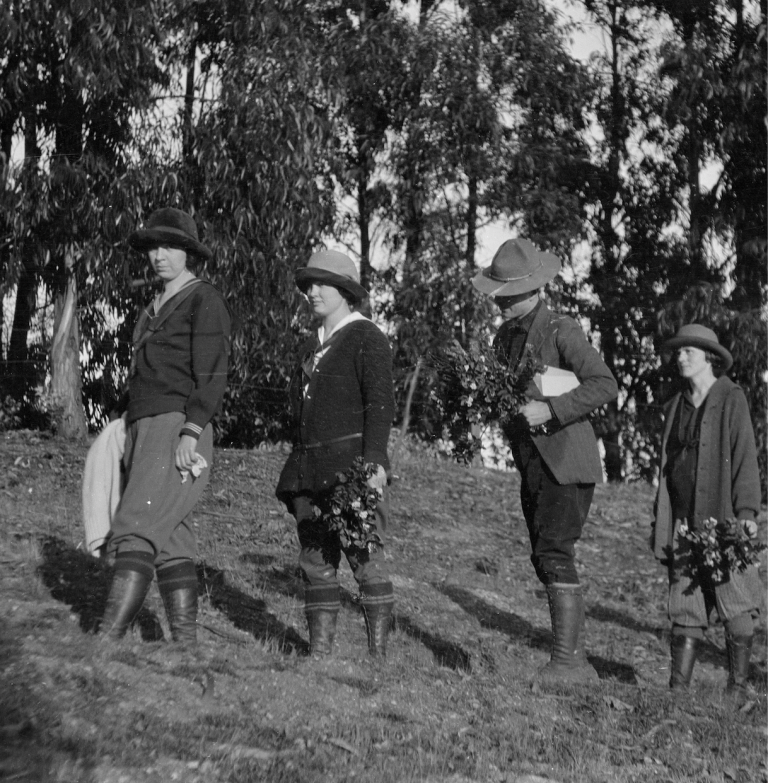 At age 51, Mexía enrolled at University of California, Berkeley. Mexía participated in a university expedition led by Dr. E.D. Furlong, curator of paleontology, who introduced her to botany. After the trip, Mexía enrolled in botany classes, for the study of plants, including their properties and biochemical processes (Britannica). Botany consists of  collecting and classifying plants. In some cases, plants need to be dissected in order to classify them, which requires plants to be pressed and dried in the field. 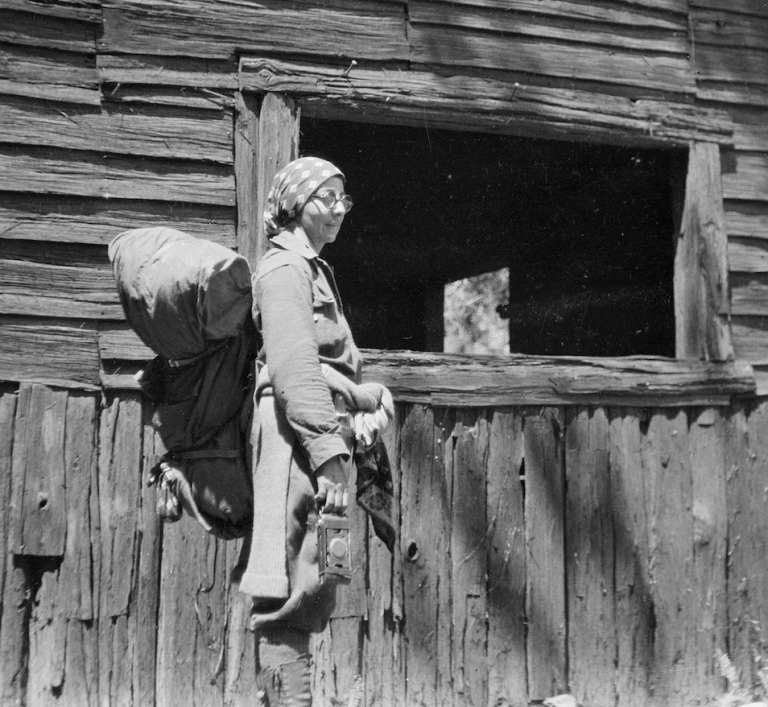 After having the opportunity to collect plants in Mexico, Mexía decided to take additional courses at the California Academy of Sciences in San Francisco. There she met prominent botanist, Alice Eastwood, who became her mentor and long-term friend. 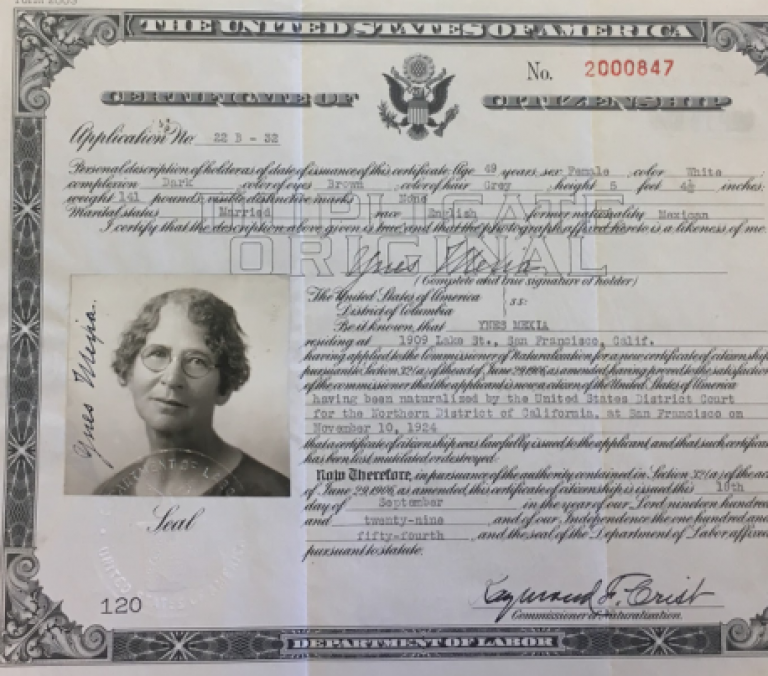 Mexía was born in Washington, D.C,, but she had given up her U.S. citizenship after moving and working in Mexico and marrying twice to Mexican citizens. 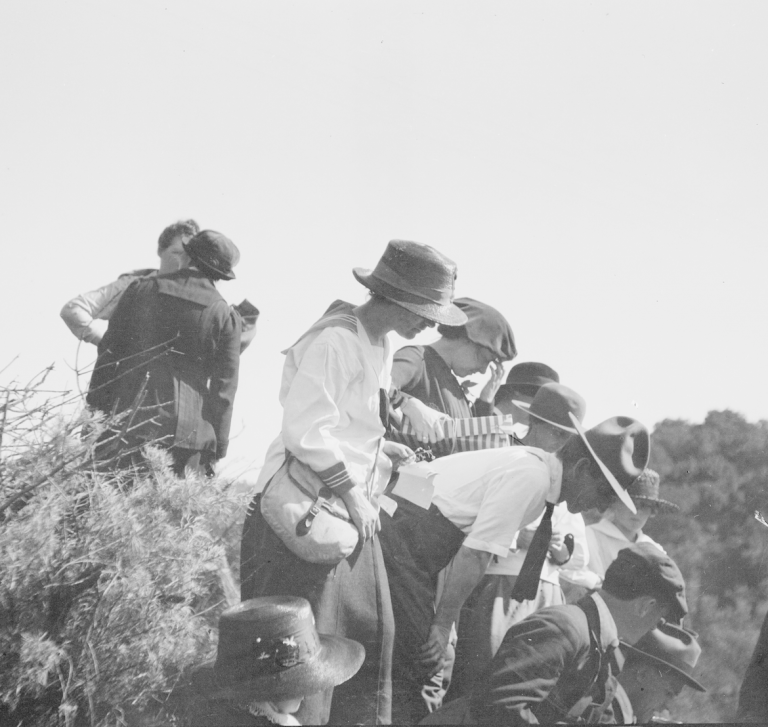 In 1925, Mexía took a course on flowering plants at the Hopkins Marine Station in Pacific Grove, California, where she met Roxanna Stinchfield Ferris, Assistant Curator at Dudley Herbarium at Stanford University. Ferris and her husband were going on a collecting trip to Sinaloa and invited Mexía. Mexia in turn requested funding from Alice Eastwood to collect for the Academy of Sciences. Eastwood agreed to pay Mexía on a per specimen basis.

Mexía asked  friends and Alice Eastwood to help fund the equipment she needed to collect on her own. Mexía found a native guide and they traveled to Sierra Madre, east of Mazatlan. Unfortunately, she wasn’t able to extend her trip for very long, because she fell off a cliff trying to grab a specimen, and broke some ribs and injured her hand. Prior to her fall, Mexía had obtained nearly 500 specimens, one of them was the Mimosa mexiae,  the first of several species named in her honor. 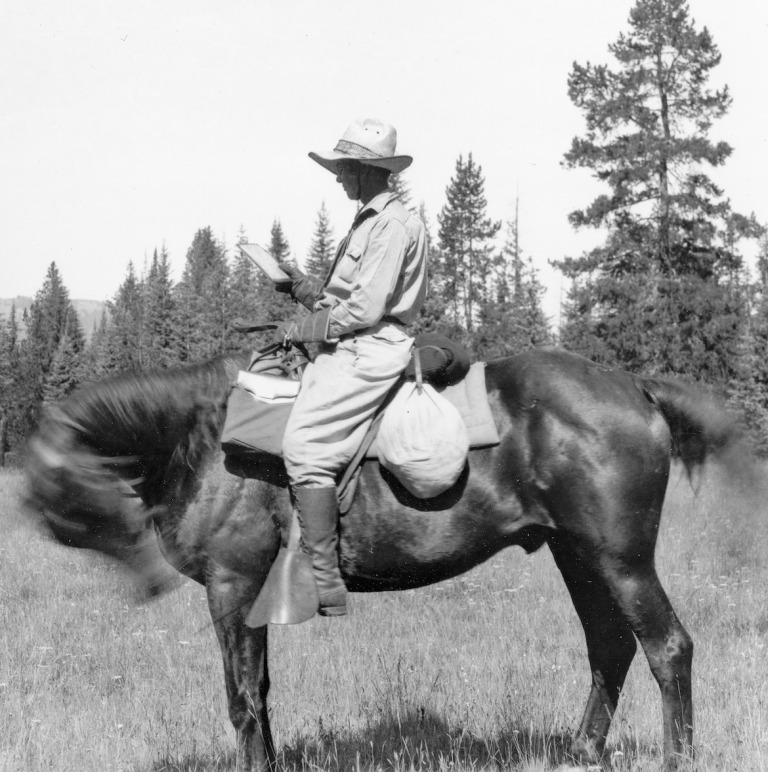 In 1926, Mexía obtained funds from herbariums and natural history institutes across the U.S.,  for her first solo collecting trip to Mexico. She traveled to Sinaloa, Nayarit, Jalisco, and into the Sierra Madre. On this trip, Mexía collected a total of 33,000 specimens. 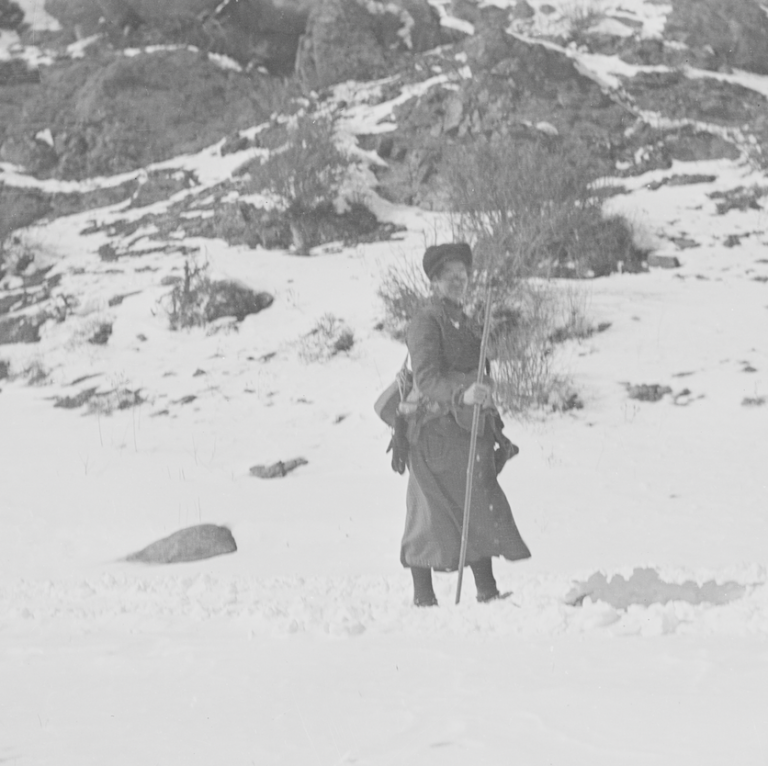 Soon after her trip to Mexico, Mexia gained recognition as a collector, and the British Museum of Natural History funded her trip to Alaska’s Mt. McKinley National Park (now Denali National Park and Preserve). The Academy of Natural Sciences in Philadelphia also requested duplicates of her collection. On this trip, Mexía collected 6,100 specimens. 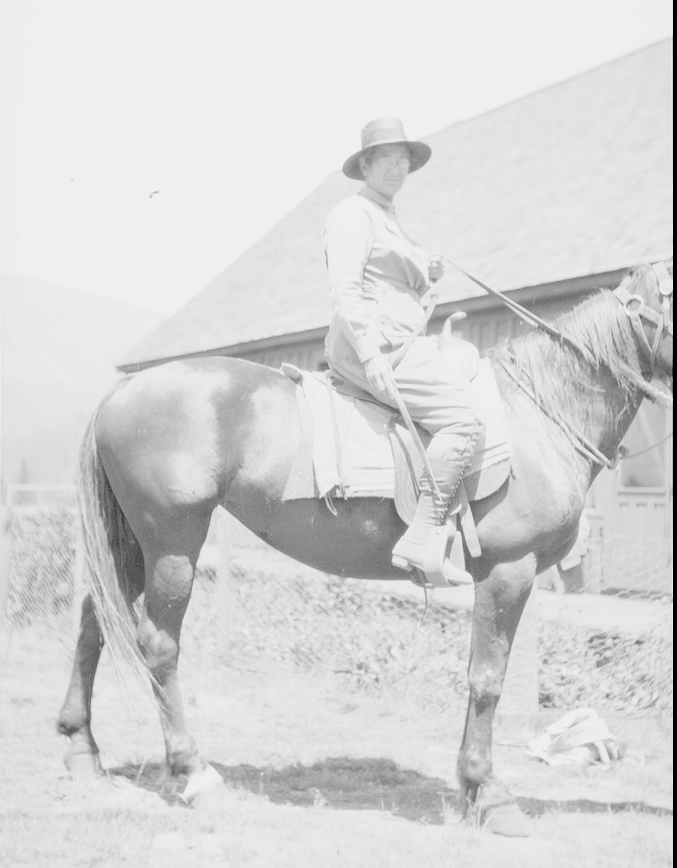 Mexía traveled to Chihuahua, Puebla, and Hidalgo where she collected 5,000 specimens. 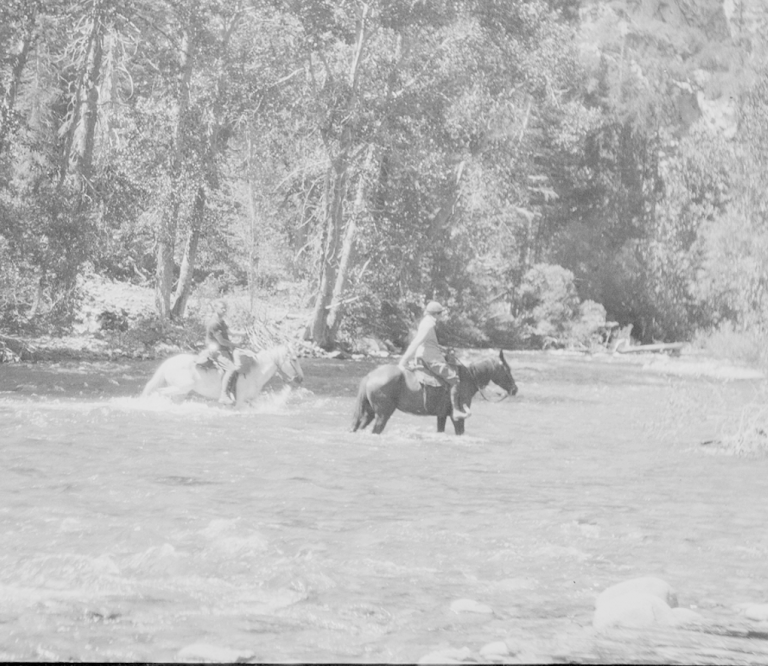 Mexía traveled to Brazil, where she started her expedition in Rio de Janeiro, then Vicosa, Diamantina, the state of Minas Geraes, traveling up the Amazon River and other river tributaries in the states of Para and Amazonas. Mexía then traveled to Peru, towards the upper Amazon and Santiago river valleys. She collected 65,000 specimens. After her trip to the Amazon, Mexía’s fame as a botanical collector spread. In San Francisco, she was often invited to give public talks about her trips, collection, and explorations. 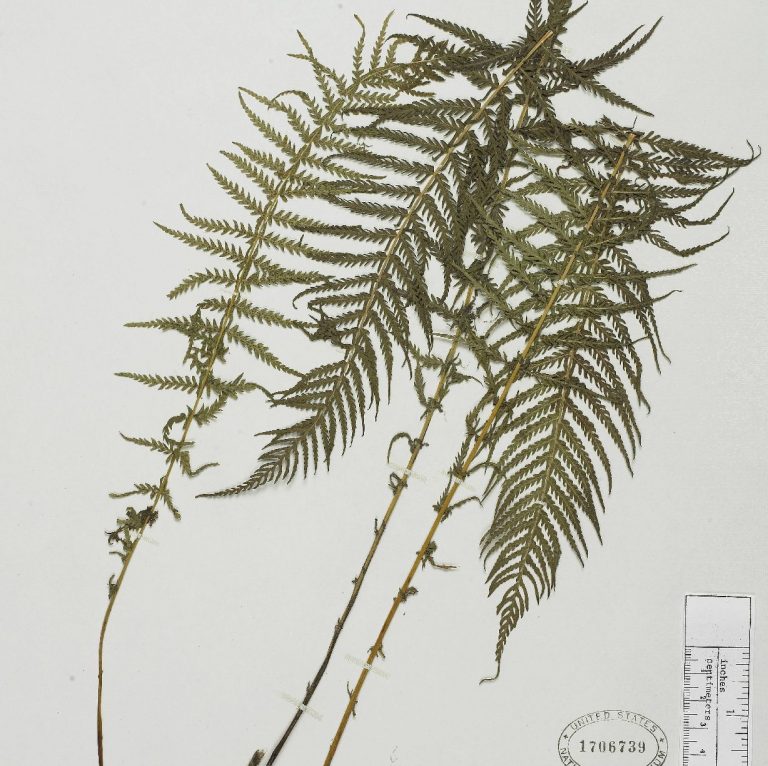 Mexía traveled to Ecuador where she collected 5,000 specimens of plants in the coastal plains and eastern Amazonian slope of the Andes, the northern highlands, and Colombia border. 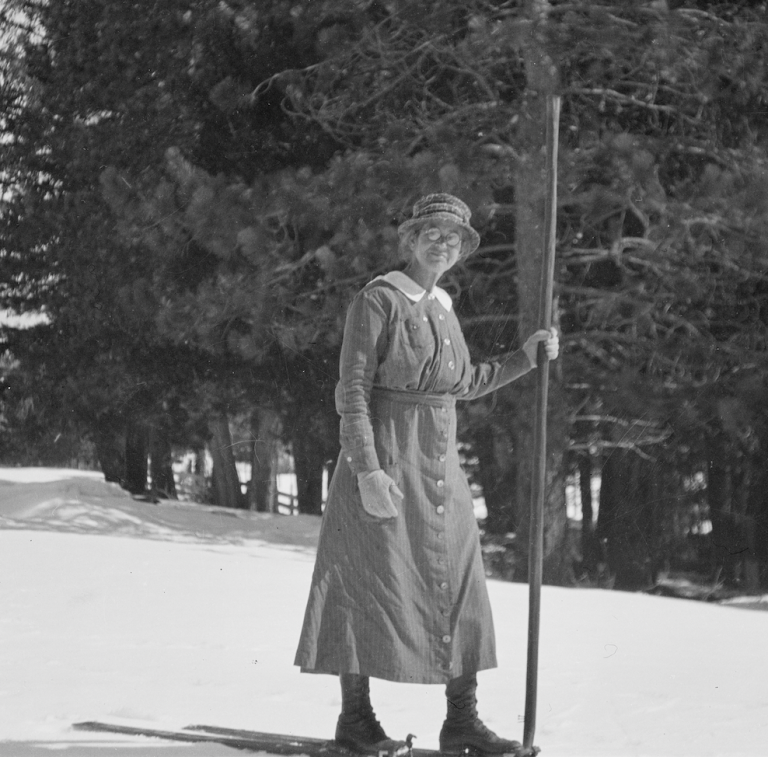 Mexía started an expedition in Peru, where she travelled to Cuzco, Machu Picchu, and Cerro del Pasco. She then moved to southern Chile, including the Strait of Magellan and Tierra del Fuego. Mexía then traveled to Tucuman and Mendoza in Argentina. She ended in Esmeraldas, Ecuador. On this trip, she collected 13,000 specimens. 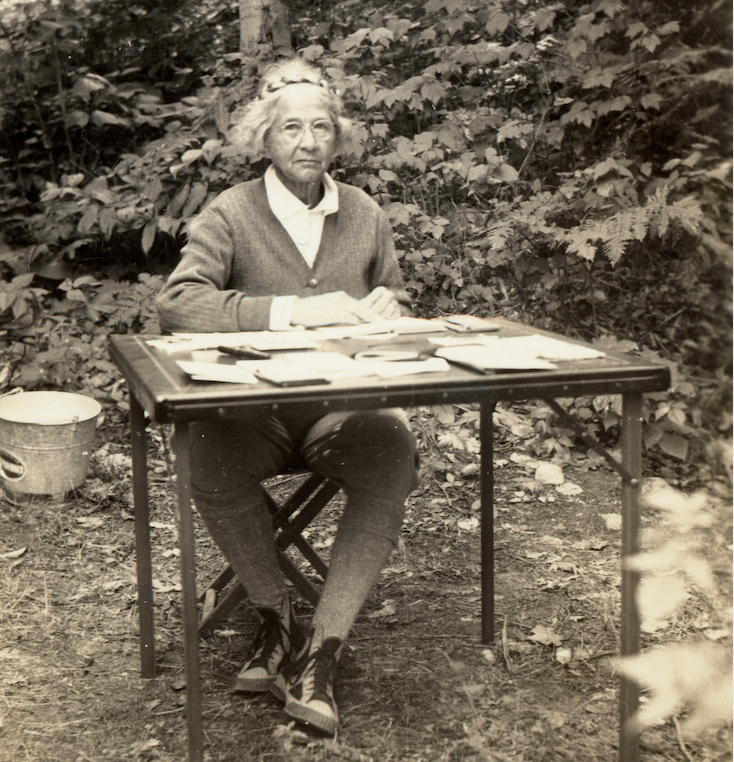 Mexía travelled to Southwestern Mexico including Oaxaca and Guerrero. Feeling ill by the end of April, she consulted a doctor in Mexico who recommended she return to the U.S. She cut her expedition short, having collected 13,000 specimens.

Returning to San Francisco, Mexía was diagnosed with lung cancer in May of 1938. 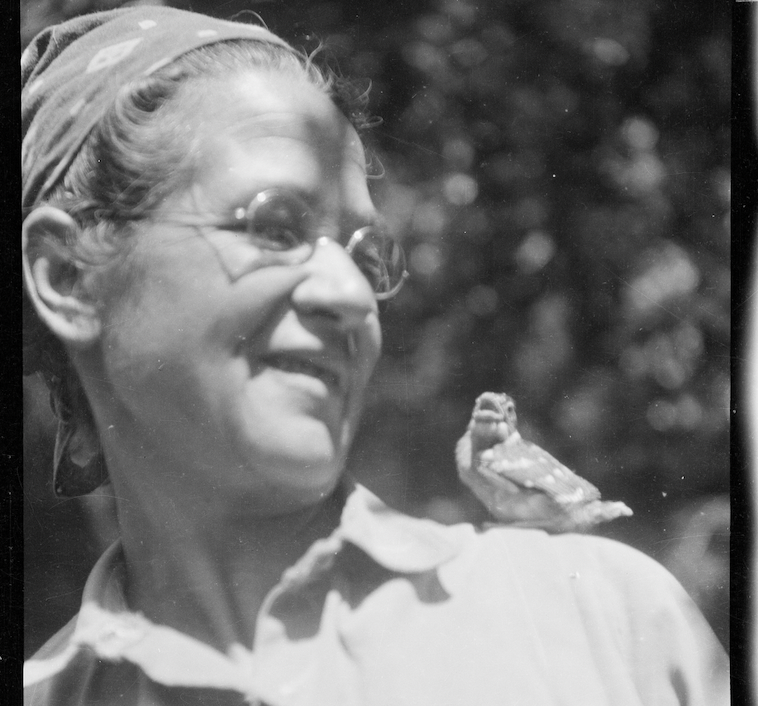 Within two weeks of her diagnosis, Mexía died of lung cancer. She included the Sierra Club and Save the Redwoods League in her will. Throughout her career as a botanist, she collected approximately 140,000 to 150,000 specimens, including over 500 new species of plants. 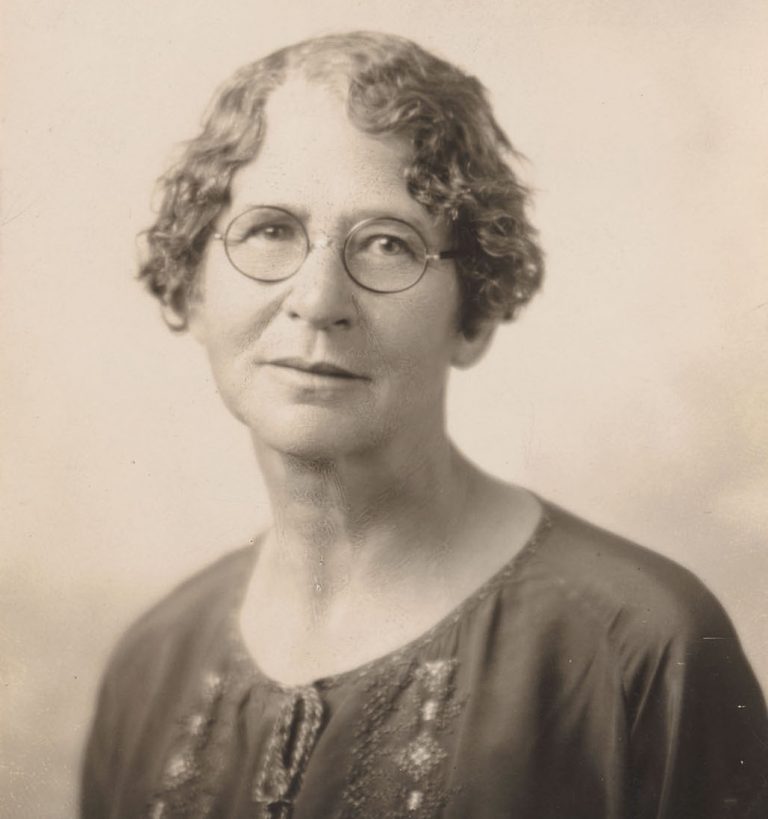 The Save the Redwoods League established the Ynes Mexia Memorial Grove at Montgomery Woods State Reserve in Mendocino County, California.

There are 62 national parks in the U.S. today. The National Park Service oversees 417 parks and monuments across the nation, which receive more than 318 million visitors every year.  Funding cuts, environmental rollbacks, and less environmental regulation  are threatening the preservation of U.S. national parks today.

Racial justice activism in 2020 has inspired examination of U.S. history, including the history of the Sierra Club. For example, the organization’s founder John Muir and early members of the Sierra Club were eugenicists who offered membership exclusively to white people. Research about the location of toxic spills, landfills, and other environmental disasters has documented their disproportionate proximity to  people of color and indigenous communities, thus exacerbating persistent patterns of social and health inequalities today. 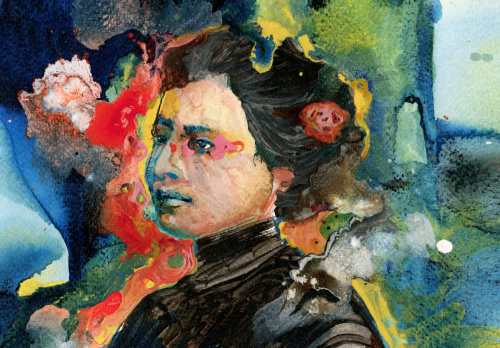 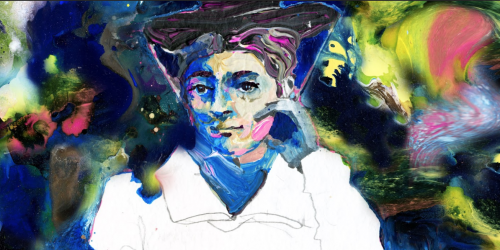